Radio Brandy has relocated its west coast operations to Kern County. The relocation gives us access to faster broadband and all things living in a town offers like: A post office, grocery store, people and paved roads. Being out in the middle of nowhere had it drawbacks; like having to drive 40 miles for everything.

Radio Brandy is proud to be following Abby Sunderland, on her Voyage home. Abby is a winner to us; no matter which way she home. Very few of us, would even have the guts to take on the world; like Abby has.


We are very proud of you! Abby! It's good to know you are safe.
Follow Abby here

The AM carries weather updates 24/7 on 1610AM, while the FM on 104.7 carries Christmas Music and Old Time Radio until the 26th of December. The part 15 stations serve a small neighborhood that has limited radio service. 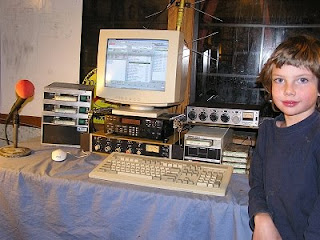 6 year old Brian, at the controls of his new radio station
Posted by Radio Brandy at 1:07 PM No comments:

We spent the weekend rebuilding a transmitter and cable assemblies. With the wind blowing endlessly around here; antennas and cables take a real beating. The areas around the fittings, receive the greatest abuse; so fittings were replaced first.

Murphy's law was definitely in effect this weekend: For the maintenance project; it was necessary to switch to our auxiliary transmitter and antenna. What should have been a quick switchover; took well over two hours. You name, and it failed! cables assemblies, SWR meter, antenna; you would never know we just tested it the week before.

Another change was made: Since 90 percent of the programming is News-Talk; it was decided to drop the stereo signal. The advantage to dropping the stereo signal is improved coverage and less noise.

Summer May Be Canceled In High Desert

It's June here in the High Desert, while normal temps should be in the high 90's during the day; the temps have been in the 60's with strong winds blowing nearly everyday since the first of June. Even our Arizona location has been below average, with temps in the mid 90's. Normal for this time of the year is 118 plus.


So much for global warming!

Radio Brandy will be adding new elements to its website and other sites it host. The new elements will include instructional videos; designed to help with the construction and operation of part 15 AM radio stations. The videos will be located on a new page, to be added soon.

Windows Vista Business is now on the Radio Campus; nobody can accuse us of jumping into things on a whim. Radio Brandy's homepage for the first time was created with Vista, using Site Spinner 2.7f. Up to this point, our website has been created with an old 350mhz running Windows 98SE; everything we use to create the site was on the old computer. From images, to paint programs and other editing tool were on it. The one advantage to the old computer; is that we knew our site was available to anyone with an older computer, and it still loaded pretty fast even with a slow computer.
One loophole we have found with Vista Business is you can't RIP CD's, even if it's your own work. Others have reported the problem; but nobody at Microsoft can explain why. We will work around that problem by upgrading an older Compaq Pasario 6000 running XP, but only has 128mb on board.

Radio Brandy
We develope new media and other forms of mass communication open to the public. We also educate and train future broadcasters.